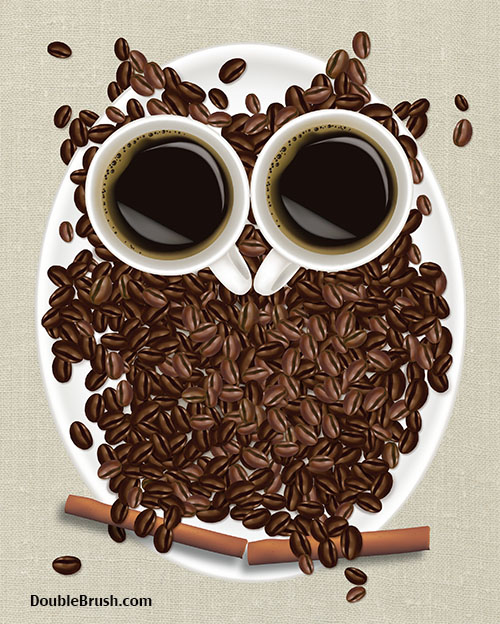 Trending home decor prints right now are our original owl coffee print and matching coffee owl print sets. When I asked my customers why they are purchasing this coffee owl picture, the last two people told me the same thing, "I am obsessed with coffee, I love owls, and it is perfect for my owl themed coffee kitchen decor."  Everyone has also said that they love this owl coffee image.

A little bit about our design process. Our wide awake coffee owl digital print was made by selecting and arranging each little coffee bean artwrok one by one, to create the owl's form. We like that it is not completely neat and some stray beans are here and there. Two white cups filled with black coffee form the eyes, while the cup's handles form the bird's beak. We placed the owl on a white oval platter to create the most contrast in color with dark and light, and had the owl perch on two cinnamon sticks as tree branches. A modern natural faux linen background gives the image a contemporary and crisp look.

This whimsical owl coffee bean print would look great with any style of coffee ktichen decor. We also love coffee and have designed more coffee themed prints. Any suggestions for coffee sayings would be welcome. 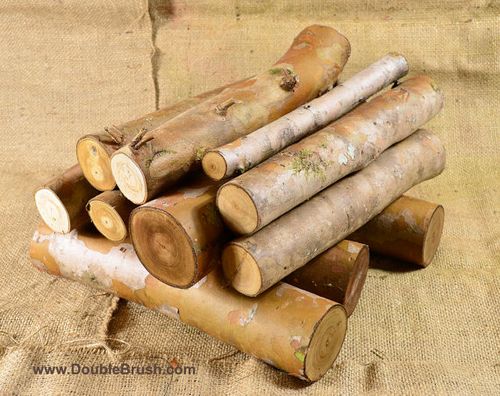 More and more people are discovering the art and fun of smoking food. Smoking meats such as beef, lamb, chicken, turkey, and pork (think smoked ham) imparts a mouth watering flavor that cannot be duplicated. Cheeses, vegetables, and even beer(!!) can also be smoked.

Foodies (and regular guys and gals) that are into using their smoker or grill to barbeque, are always looking for different kinds of wood to experiment with, as each wood gives a different flavor to the food. Apple is a common favorite, as is Hickory and Mesquite. However, for the sheer exotic 'wow' factor, consider giving fresh cut organic Guava wood from Hawaii.

We have wild guava trees growing on our property on the Big Island of Hawaii, and will cut tree trunks and limbs fresh for you when you order. This green or unseasoned guava wood gives the chef the greatest creative control, asl he or she can season or let it dry out till it has the perfect moisture content. Of course no one agrees on what that is;)

Guava wood imparts a subtle sweet fruity aroma similar to apple wood and has a light smoke. Use it alone or combine it with other woods to create your own unique flavor blend.

We offer 3 sizes of Organic Guava Wood for Smoking that fit in a small, medium, and large flat rate box. P.S. It is on sale now at 25% off the regular price! 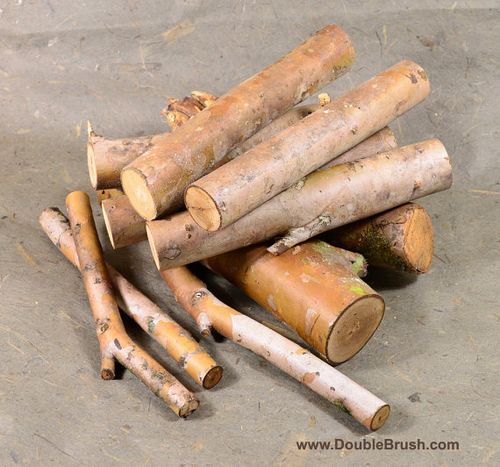 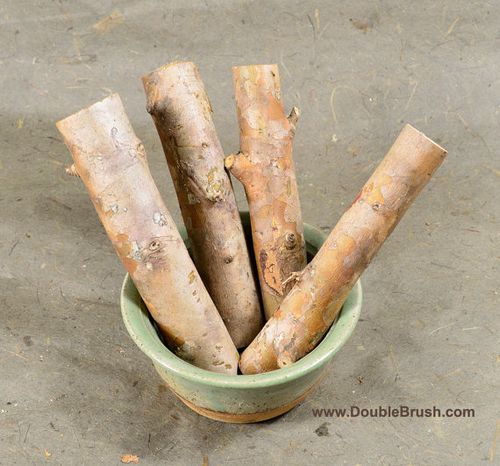 Pineapple is My Best Bro Why is pineapple my best bro? When it comes to the Fruit family, my brother the pineapple gives me Bromelain to keep me strong and healthy. Bromelain is a combination of enzymes called proteolytic enzymes, that assist with the digestion of protein -- very helpful when it comes to reducing belly bloat and gas.

Some of the other health benefits of bromelain include reduction in inflammation after surgery and injury, lessening pain from osteoarthirtis, and as a complementary treatment for sinusitis by helping to reduce congestion and improve breathing.

Now for the kicker, bromelain in its natural form is only found in pineapples! You can buy dietary supplements that are derived from pineapple fruits, but eating a fresh juicy pineapple with its delicious blend of sweet and tart flavors, is something to be savored and enjoyed.

If you live in the US, we can ship fresh pineapples from Hawaii direct to your doorstep all year round! We offer fresh pineapple fruit with the crown attached in a 2 piece or 6 piece cushioned box, and exclusive pineapple gift baskets with added treats.

We cut and photographed the above pineapple boat the other week. (I couldn't wait till our photo shoot was over so we could eat it!) Find directions for how to cut your own pineapple boat here.

Now you know why pineapple is my best bro!

Radiant Orchid is the Color of the Year for 2014 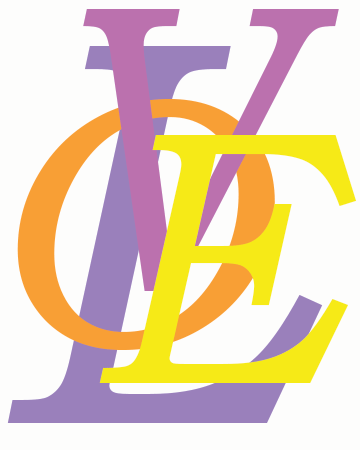 Radiant Orchid was named the color of the year for 2014 by Pantone, the global color authority and provider of professional color standards for the design industries. Their color choice influences products from fashion, home interiors, cosmetics and more.

This is the description of their Radiant Orchid color choice:

“An enchanting harmony of fuchsia, purple and pink undertones, Radiant Orchid inspires confidence and emanates great joy, love and health. It is a captivating purple, one that draws you in with its beguiling charm.”

It just so happens we designed a typographic print of the word LOVE, with the letter V being in Radiant Orchid. We also have a matching orchid print of a beautiful bouquet of illustrated orchid flowers. Our original art prints are affordable and printed on heavy weight archival paper. We invite you to come and take a look at the rest of our prints. 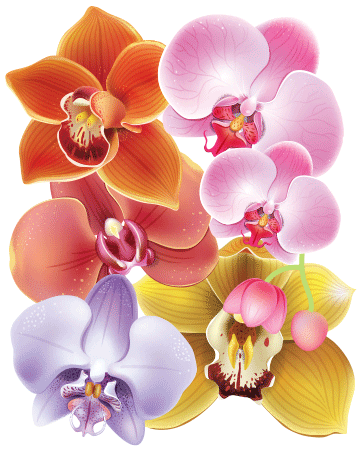 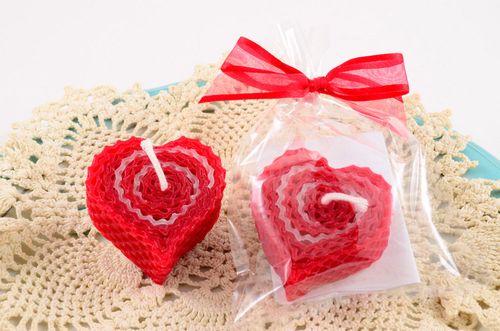 When I designed our heart shaped hand rolled beeswax candles, I thought of them as party favors for engagement parties, wedding parties, anniversary parties, or a little extra I love you gift. However, our customers are so clever and come up with many other different uses. Today I received this nice feedback from a customer using our heart candle favors to decorate her Valentine's Day gifts.

"Picture does not give this candle justice. Very pretty and will look great on my gift packaging instead of a standard bow."

We can also make these heart favor candles in other colors, with or without the contrasting swirl color. For customized candles with personal customer service, please feel free to contact us. 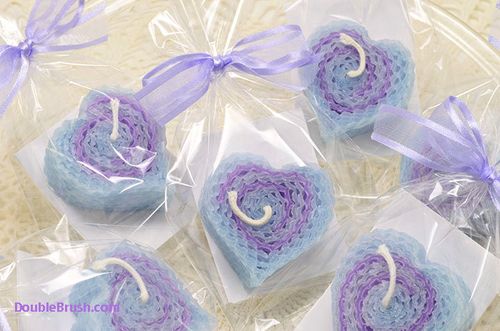 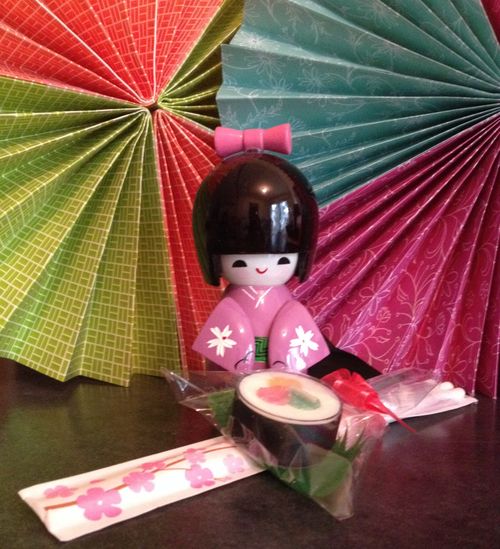 The other week I wrote about how our customer was throwing a kokeshi doll themed birthday party for her daughter, and ordered our sushi soy tealights as Japanese party favors for the adults invited to the party. She was so kind and wrote me the following and sent the photograph which she gave me permission to share:

Just want to let you know that I received the candles last week. They're so cute and packaged them well.

Anyways, here is a picture of the favors I'm giving to the parents at the party.

Thanks again! I will definitely buy from you again.
Rachelle

She is giving a sushi candle party favor with a pair of nice chopsticks packaged in a cherry blossom design wrapper. What a great idea! I like how they are both beautiful and useful products that look good together, and is a wonderful little take home gift for the adult guests. 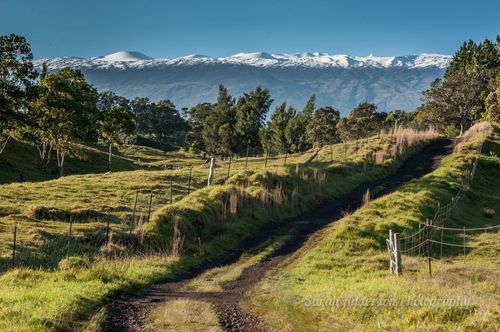 Today I awoke to see snow on Mauna Kea again. Not as much as a few days ago when this beautiful photo was taken though. I just had to share this stunning photograph by Sarah Anderson who lives in Honoka'a, here on the Big Island of Hawaii.

I love how this photograph of snow on the mountain peaks of Mauna Kea in the background of a peaceful country road scene could be almost anywhere. Photos like this show how wonderful and diverse the climate is on the Big Island. What does Hawaii have to do with the Hunger Games: Catching Fire movie, and how can I win a trip to Oahu to retrace Katniss and Peeta's footsteps during the 75th Hunger Games competition?

The North Shore of Hawaii was used as the location for the fictional Panem's annual battle to the death match in the second Hunger games movie, part of a planned trilogy. Kawela Bay subbed as a saltwater lake in the Quell arena, and the lush dense scenery of Waimea Valley played host to the jungle scenes, minus the skin-eating bistering fog and wild monkey-like creatures which were special effects added to the movie later.

Amazon, yes the Amazon, is sponsoring a sweepstakes to win a free trip to Oahu, Hawaii. No purchase or payment is required, but you do have to sign up for a free Amazon account and FaceBook account if you do not already have one. They want you to "like" their pages.

The Grand prize is worth over $3,000 and includes a trip for two with airfare (round trip economy class), and 4 nights at a hotel to be determined later.

This sweepstakes is only open to US adult citizens, and ends on March 6, 2014

This is the Amazon Hunger Games Catching Fire Sweepstakes link with complete details and directions.